Ninety years ago, on 12th June 1929, Annelies Marie Frank was born in the Germany city of Frankfurt-am-Main. When she was four her family relocated to the Netherlands, and at the age of thirteen she began writing the diary that would bring her posthumous fame. I am one of millions of people for whom Anne’s diary was an introduction to the Holocaust: I’ve read it countless times, alongside numerous biographies, memoirs and other books detailing her life, death and legacy. To mark what would have been her 90th birthday, this blog comprises some reflections on what Anne’s writing has meant to me, and on its enduring relevance and importance over seven decades after The Diary of a Young Girl was first published.

I was about thirteen when I first read Anne’s diary, and was actively keeping one myself, so her experiences of puberty and frustrations with family members were very relatable. As all my grandparents had lived through World War Two, I was semi-aware of the historical context, but nonetheless the end of the book left enormous, unanswered questions: four words, ‘ANNE’S DIARY ENDS HERE’, followed by two pages briefly outlining her fate and that of the others who hid in the Secret Annexe for two years. I wanted to better understand why this had happened: why had these eight people been forced into hiding, arrested and then deported to horrific places? How had only one of them survived?

And so I started to read everything I could find about Anne Frank and her family. Perhaps this was my first foray into independent research and part of what led me to study history at university. It wasn’t a pleasant subject, but no matter how appalled I sometimes felt, I had an innate sense that knowing about this mattered. Under the Nazis, policies had been implemented that led to the deaths of millions, among them Jews (like the Franks), homosexuals, Roma, Sinti, people with disabilities, and political opponents of the regime. This had happened not so very long ago, nor so very far away.

History is so important: I firmly believe we must learn from what has passed before (and not only in our home countries), and acknowledge its impact in forming our present. Although it was never a core part of my history curriculums, at either school or university, the Holocaust was certainly mentioned and I believe we had at least one literature class on Anne’s diary. Yet, I was shocked to read last year that a survey conducted in America suggested that 22 per cent of millennials weren’t sure they’d heard of the Holocaust, with over two thirds unable to identify Auschwitz. If this is representative – and indeed, even if it is not – the thought that future generations may not know, still less understand, how quickly racism can become ingrained in law, is frightening. And while the Nazi policy of extermination is arguably the most infamous genocide of the 20th century, it is not the only one.

The generation that lived through the Nazi era will soon be gone. Never have I been more acutely aware of this than in the last few months, with the recent deaths of both my Nanna and Gramps, who were born in 1929 and 1931 respectively. They lived to tell their stories of the war, of living through the Blitz in London and being horrified by pictures of Bergen-Belsen, but there is so much more I could have asked and the opportunity is now gone. Many survivors of the Holocaust have recorded their stories for posterity, but these must not be relegated to archives. What happened under the Nazi regime is not ancient history and should not be treated thus, even as it passes from living memory.

Perhaps Anne Frank wouldn’t have lived to 90 if she had survived the concentration camps. Perhaps she would still be in excellent health, and in another 10 years we’d be marking her centenary. Or perhaps her diary would never have been published. Speculation seems redundant when the facts are plain: she died in horrendous circumstances at the age of 15, in the country of her birth, because she was Jewish. We know her name because she wrote a diary that was saved by chance, that her father then fought to publish. How can we start to comprehend that her story, and her talents, are those of just one person among over six million? Is it even possible to do so?

The Anne Frank Trust UK runs educational programmes to combat prejudice and discrimination and is marking Anne’s 90th birthday with an #IstandwithAnne social media campaign. Racism, homophobia and anti-religious feeling and rhetoric are sadly still very prevalent in the 21st century and there are prominent public figures in this country (and elsewhere) who, I believe, threaten advances that have been made in creating more equal, accepting societies. Across the world, people are verbally and physically attacked every day because they are perceived as being different. I didn’t plan to end this blog on a negative note when I started drafting it; I wanted to applaud the amazing writer Anne was and celebrate the very tangible difference I am sure her diary has made in promoting tolerance and raising awareness. But while I hope those positive sentiments are clear, it does also seem to me that 74 years after her life ended, the message of Anne Frank’s diary – and remembering the context in which it was written – has never been more important. 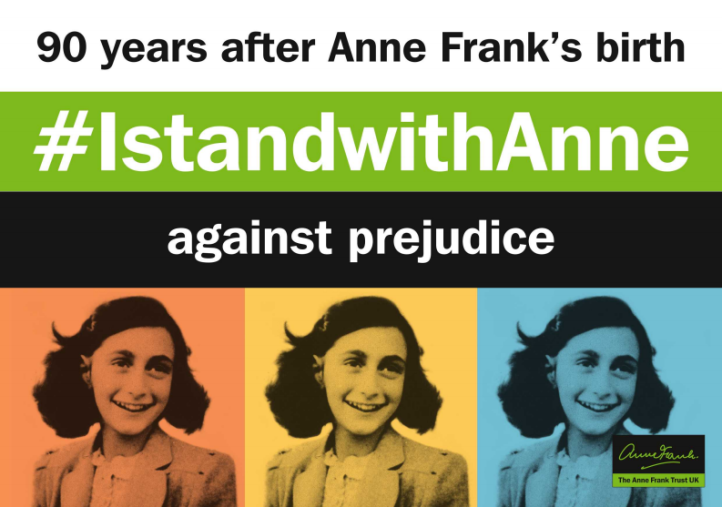 All content, unless otherwise stated and excluding cover images on the ‘Books’ pages, © Jemma Saunders 2018, 2019.